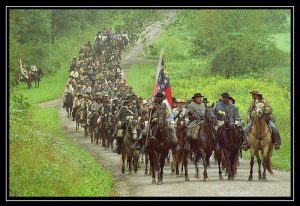 Preparations have begun to once again bring together history lovers and detectorists to recover more of our Civil War history in Ohio. This year my crew will tackle a farm flooded by both Confederate and Union forces that battled it out for three hours on an undisclosed site. At this time the dig crew will be directed as to where lodging can be obtained, however the dig site will remain undisclosed until further notice, possibly up to the weekend of the event at the Landowners request. Event will take place on October 7th and 8th, 2017. A presentation will be held on October 6th at 12 pm at the Coalton Ohio community building located at 11 Stewart Street, coalton Ohio.
There was very little activity in the state of Ohio during the Civil War until 1863 when General John Hunt Morgan led his men on a raid into the state. Morgan and his confederates spent 13 days in the state, pushing as far north as Columbiana County before being forced to surrender.

Hundreds of men and horses, riding hard and skirmishing on occasion with Union troops, inevitably left behind artifacts marking their presence in the state. It is the goal of the CWPPO to recover these artifacts for regional historical societies and museums to preserve this important event in our state’s history.

Look here for news about the 2017 CWPPO Hunt and the efforts of our team of expert detectorists.